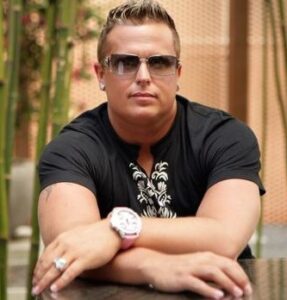 The mere act of surviving on a day to day basis in the music industry is the foundation from which a true producer builds his craft. Multi-talented veteran producer, Bryan Lamontagne, is no exception to this rule. To understand where Bryan is right now, is just half the equation. The other half lies in where he came from:

Bryan Lamontagne (B.L. Tha Hook Slaya), is an american Grammy award winning producer. Bryan was born and raised in an urban neighborhood in Salem, Massachusetts, also known as the “witch city”. Coming up as a young kid, Bryan was subjected to the sounds of hip-hop, R&B and latin music. He always had a great ear for music but was really drawn to the whole urban sound. Ironically, Bryan began his life in music as a classical trumpet player, but started to pull away from classical music as he got older.  After attending Berklee College of Music, he began his professional music career working with members from the Luny Tunes famous mas flow camp, including Mr. Phillips, Nelly, Bones and Doble A’. In addition he worked alongside famed Hip-Hop Producer Vinny Idol in the Bronx, NYC.

After working on countless tracks and ghost writing for some of today’s biggest R&B/pop and hip-hop artists, Bryan felt it was time to branch out on his own… He began that next journey by creating his first billboard charting record with the platinum selling  group T.O.K., in Kingston Jamaica. Creating a pop infused reggae sound was something that stuck and became a calling card for him. After a few years on the island the name, “B.L. Tha Hook Slaya” was born… laying roots on that island were the absolute foundation for Bryan’s life as a producer.

In September 2021, Bryan achieved the Number 1 spot alongside Capleton for the song titled “My Time Now”, on Apple Music. In addition,  the brand new single  “Dior Kicks”  released on Friday October 8th, 2021 alongside Tommy Lee Sparta and his son Skirdle Sparta. The song trended in the top 15 on YouTube and went to number 5 on Apple Music in its first week. Tommy Lee has been dubbed the Biggest  Dancehall star in Continental Europe.  Bryan has achieved multiple top 5 billboard hits and has been on over 20 top 10 charts across the globe and is continuing to climb.